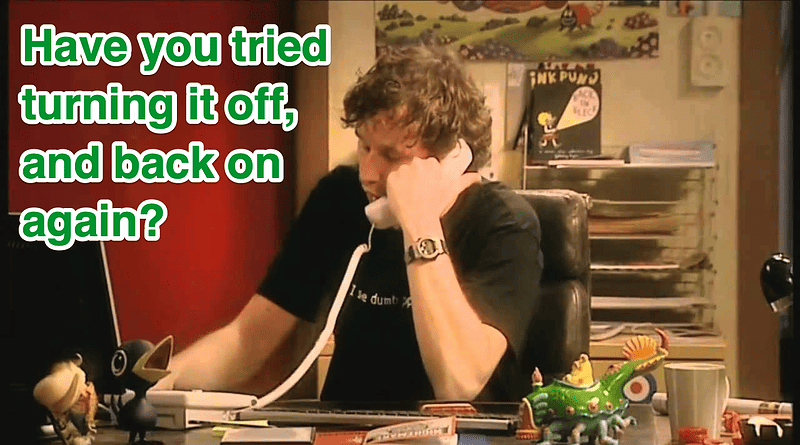 Roy from the Channel 4 comedy The IT Crowd, famously asked:

Have You Tried Turning It Off And On Again?

You’ve almost certainly heard a similar phrase before when asking someone in IT support for some assistance. You’ll be on the phone and they ask this seemingly irritating question. I’m still surprised how many people don’t try this themselves first, it really does fix about 80% of all technology problems (Although probably not for more complex systems like The Large Hadron Collider or an old-style nuclear reactor!). So get into the habit of trying it, if something isn’t working as you expect.

But… Why Does it Work?

With older technology it was probably due to overheating, however with modern systems it’s more likely because we forget how complex modern technology is under the hood. The user interface of an iPad is quite simple, yet the hardware and software to get it to work is highly complicated. No single person on Earth could build their own iPad from scratch (indeed, British designer Thomas Thwaites couldn’t even build a toaster from scratch).

When something is highly complex it is likely to have glitches in the system on a regular basis. Most systems are robust enough to cope with many glitches and correct for it in numerous ways, however, over time a system can get itself into a twist and start acting in an odd manner. It would take a long time to find out the exact reason for the problem occurring, and is often pointless to do so, because most of the problems don’t recur again, or at least very infrequently (which again hints at the complexity of these systems).

In World War II they blamed issues like this on Gremlins. Not to be confused with the fictional characters from the 1980s:

So remember, when something unusual or unexpected happens with a piece of technology, like your phone, laptop, desktop computer or tablet:

Try Switching it Off and Back on Again!